A powerfull antivirus against Dangi

I don't know that should I post that here or not but being a muslim we should follow such. That is what the SAHABA KIRAM followed to protect themselves against mishaps.

adding to this is cleanliness of your homes and surroundings: Puddle of water near your area or in your own house!. Also there is no alternative for good health.

I heard on TV if you drink apple juice with lemon juice, it could resist yourself from this virus.

Moreover you could also use pappaya leaves.

But the best option is to take preventive measures against mosuitos and contact you GP.

Please correct the spelling in title

And yes, since everything is under Allah's control, therefore asking Allah (along with other possible remedies) gives the best chance of cure

Have anyone read DUAA which I mentioned?

especially when one reads the dua's reference..

Mods better close this thread before it escalates..

besides that...there are many duas available, but one can also ask Allah directly or give sadqa for protection..

And i saw a hakeem recommending the same cure for dengue on some religious channel.

He also told a tip from “طبِ نبوی صلی اللہ علیہ وسلم” that drinking a glass of medium boiled water and mix honey in it, in the morning. And the doctors have favored both of the above mentioned cures.

As they result in increase of white blood cells which …blah blah blah( i didn’t listen to this part)…which finally results in protection from dengue.

So apart from that hakeem sahab most of people around us don’t believe in hakeem. It won’t hurt trying.

And i believe that there will be no effect of “دوا” without “دعا”. so keep praying.

Request to mods: can this thread be turned into dengue protection methods thread, because it is quite an issue now adays.

Obviously won't be helpful in the current short-term, but might be a promising future approach.

[quote=", post:, topic:"]
It may be possible to eliminate the deadly dengue fever by infecting mosquitoes with a bacterium called Wolbachia that prevents the mosquitoes from transmitting the dengue virus to humans. A new mathematical model, developed by Nick Barton (Institute of Science and Technology, Austria) and Michael Turelli (University of California, Davis), may be helpful in getting the bacteria established in mosquito populations.
[/quote]

From The American Naturalist,

Remember this: Kill mosquitoes and kill their breeding grounds.

How to do it? I hope everybody knows it by now. Spray loads of good quality poison in and around your house. And if someone in your 'Mohalla' or street say why are you spraying that much then spray on him too (just kidding ). Then lock the doors and windows and leave the house for few hours. Come back, and open the windows and let the fresh air come in.

Always use good quality poison. Not all expensive things are of good quality. Due to high demand, prices are going high (thanks to our beloved 'Baniya' class who love to make money on people's misery and death).

Commonsense tells me that killing the mosquitoes is the best solution. However, I am open to see proven experiments by people with "alternate science". 'Malung', 'Jogi', 'Taweez' or whatever. Get live on TV, do your trick of whatever you want to recite or anything and get an injection full of Dengue virus in your IV. If you don't get ill then I'll be convinced. But if you die due to it then the world will give you Darwin's Award. Think about it, it's a win-win situation for you. 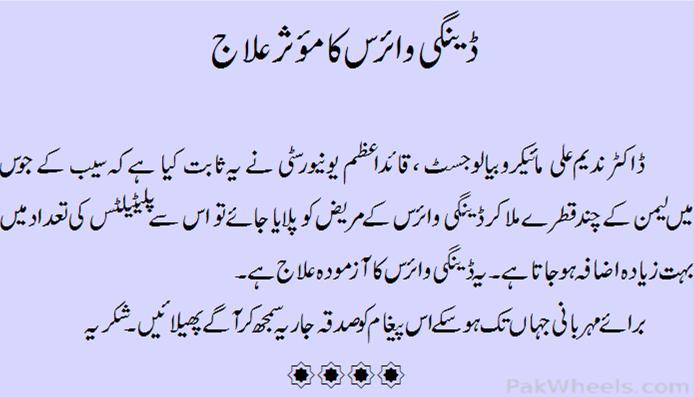 right…thats why it was sunnah to wash hands before taking a meal.

That dr. nadeem is a fraudster. Check Express Tribune.

Anyways, seemingly good tips can be found at

If you have been to army barracks, they use oil like desi mosquito repellent. Thats MOST effective.

One of my cousin got infected with dengue, he used transfer factor 4life immune booster supplement, that boost ure natural immune system to fight with virus/bacteria etc, this supplement not available in markete, but someone personally imported it, anyone interested can contact pharmacist nazir ahmad 03334210793

Just to confirm it was a costly item, around 8k or 9k

"Then lock the doors and windows and leave the house for few hours. Come back, and open the windows and let the fresh air come in"

@ wampyr! If during those 'few hours' of staying out,someone gets Dangue virus, then what? ? ! lolxxx. :-D

“Then lock the doors and windows and leave the house for few hours. Come back, and open the windows and let the fresh air come in”

@ wampyr! If during those ‘few hours’ of staying out,someone gets Dangue virus, then what? ? ! lolxxx.

Staying out means go to some friend’s or relative’s home which is safer. And if done during noon (mid-day) then your chances of getting Dengue will be very low because mosquitoes don’t like sun-light and are mostly active from sun-set to sun-rise.

Nice info,by the way. It has realy become so serious issue that we all must share all kind of info we have to protect our fellow pakistanis from this 'bloody virus'. But thanks to our federal govt. who, instead of helping provincial govt, has been busy in cajoling MQM and succeeded in getting them back on 'official looting chairs'...

I've heard raw papaya leaf juice works well against dengue. You can find it in Karachi...so people in Lahore and Punjab will have to bring it from Karachi and Sindh.